First of all, a big Happy New Year! Hope you all had a fabulous Christmas and holiday season, and I hope all your dreams and wishes come true in 2018.

So excited to be writing my first blog post of 2018, especially being that it’s about my first trip to the place that dreams come true… Disneyland Paris! So if you’re a Disney lover, get yourself a cup of tea, and enjoy!

I went on this trip with one of my besties, Claire, who also was experiencing Disneyland for the first time, so as you can imagine, the excitement was insane! And to make the trip even more magical, we went mid November, so the Christmas season had just started, and on top of that, they were celebrating their 25th anniversary!

We booked our flights, transfers and accommodation with Travel Republic, and we used the Disneyland Paris website to book our park tickets, which worked out great, however, we ended up purchasing more park tickets from our hotel as we originally purchased 2 days 2 parks tickets, but we felt like we needed more time to do everything that we wanted.

We stayed at the Vienna House Dream Castle Hotel, which is an associate Disney hotel, and only 10 minutes from the parks with a free shuttle bus service running every few minutes, which is perfect! It’s very well priced and very clean and comfortable, and the breakfast buffet was very nice, something for everyone. The only thing is, if you’re looking for magic park hours, this hotel doesn’t do them. But that didn’t bother us all that much, so I’d highly recommend this hotel if you’re thinking of a Disney trip.

We arrived at our hotel at around 10.30am, which was great, as by the time we freshened up and everything, we got to the parks at around 11.30, so we pretty much had a full day. The first thing we did was obviously go and see Main Street and the castle, and take lots of pictures. I’ll never forget the feeling of seeing it for the first time, the inner child and Disney lover in me came right out! (look to the left of me in the second picture and see if you spot anything, hehe!) 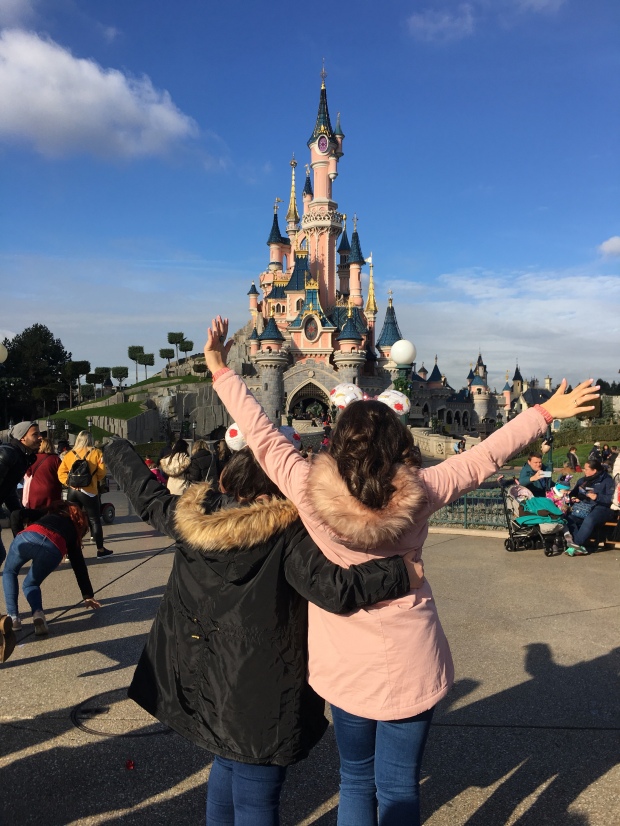 We then made our way through the park just figuring out where everything was… yada yada yada, and finally got ourselves some food, as we hadn’t eaten since like 4am at the airport, so we just found a quick found place in the park, which are so handy if you don’t want to waste too much time. We then headed onto some of the rides, Pirates Of The Caribbean and The Teacups were some of the first, and we then headed to queue to meet the main mouse, Mickey. We queued for about 45 minutes to meet him, which was fine because there were old school Mickey cartoons playing, it was inside so it was warm, and the best part of queueing is getting chatting to some lovely strangers, it’s so nice! The queueing was so worth it, Mickey was absolutely adorable, and it wouldn’t be a Disney visit without a nose kiss now would it? Eeek!

After meeting Mickey, we went through the Alice In Wonderland Maze, so cute! So many spots for photos!

We then headed to one of the rides we were most excited to go on, Big Thunder Mountain. I think we enjoyed it more than the girl in the dark pink jacket behind us, ha! 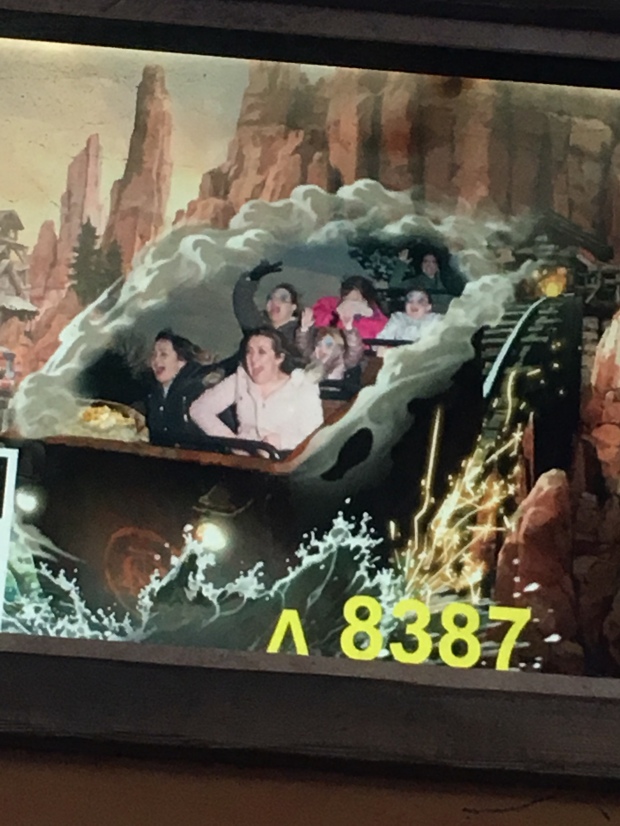 It was pretty busy the first day so we queued about an hour for Big Thunder Mountain, so after that, we headed over to see Walt Disney Studios, but didn’t go on many more rides, I mean, no one wants to spend their first day in queues before seeing everything, do they?

It was then time for the most magical part of the trip, seeing Disney Illuminations for the first time, and my oh my, was it magical! I can’t even describe it in words, it’s just the most incredible, emotional show I’ve ever seen! (Tip: if you want a good spot to see the show, find a spot an hour beforehand and stay there!)

Day two was an early start to make sure we got the most out of our day. As soon as we walked into the park, we spotted Donald, so we started off our day meeting him, what a cutie!

It was relatively quiet in both parks, I’m guessing because it was very cold and it was quite dull. It made the day so much better for us though as we only had to queue for only a few minutes, 15 minutes-ish for each ride, so we got to go on all the ones we wanted to, the best ones, we were very lucky! If you like fast, quite dark and scary ones, are Hyperspace Mountain and The Hollywood Hotel Tower Of Terror, they’re amazing!

We also saw the Christmas parade, which was so cute, and the fake snow made it even more magical. It was just stunning!

After the Christmas parade, we made our way over to the Studios park, and there was a short line to meet Goofy, and he was so much fun to meet, such a sweetheart! 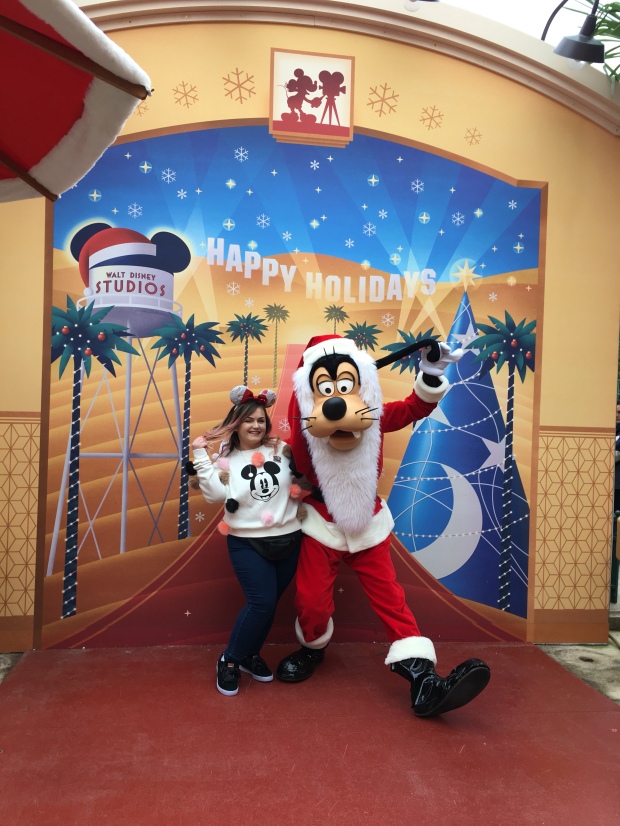 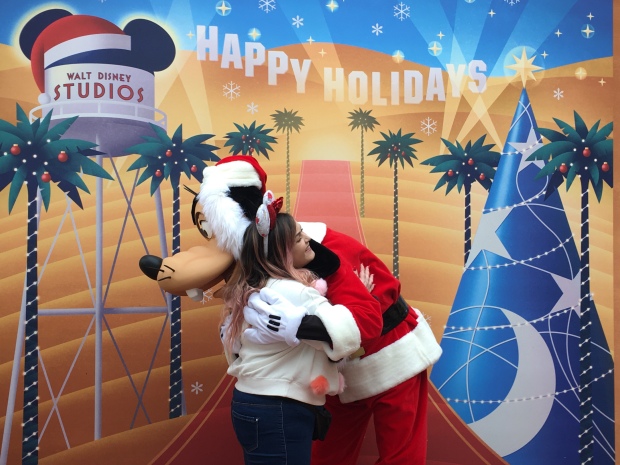 One of my favorite rides of this day was also the tram ride that brings you behind the scenes of all the special effects, that was a really cool experience!

After the Studios Park, we made our way back over to Disney for Illuminations, for the second last time, and it was just as magical! 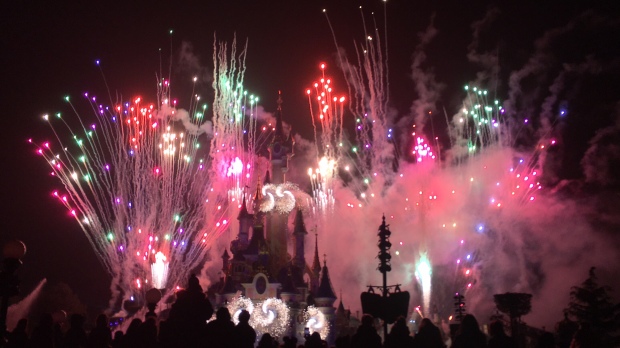 We didn’t do this on the first night as we had literally been awake for like 36 hours, so we were basically zombies walking, so we just went back to the hotel after the Illuminations. But tonight, we had way more energy, so we headed to Disney Village, to one of the cocktail bars, and got the 25th Anniversary cocktail (well, 2, or 3, but anyway…). Again, I loved this as we got talking to some really lovely strangers, and then it was off to see some of the shops before heading back to the hotel. 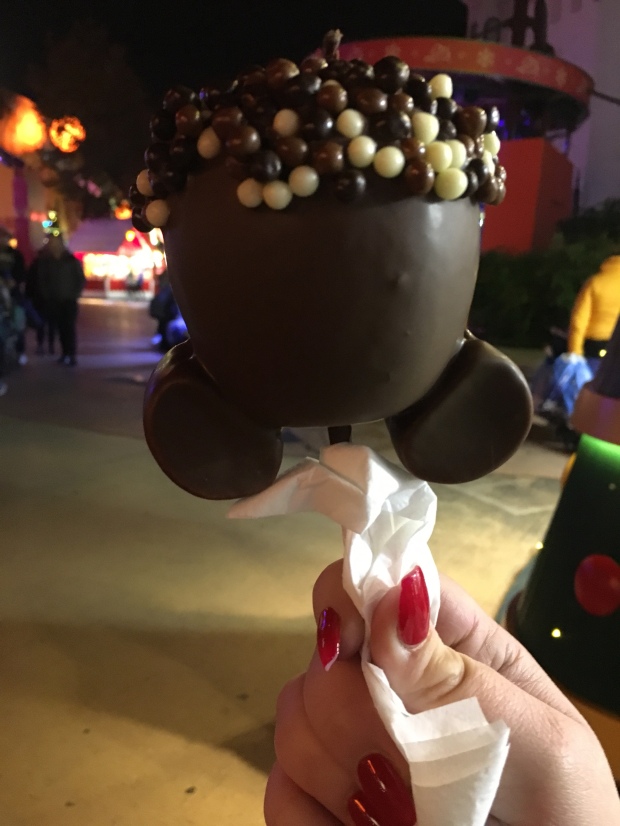 Day three was just magical from the start! Again, it was pretty quiet in the parks, so we got super lucky with the characters! We started off with The Pirates Of The Caribbean Ride, and then, straight after that, we needed up netting lots of the characters one after the other. 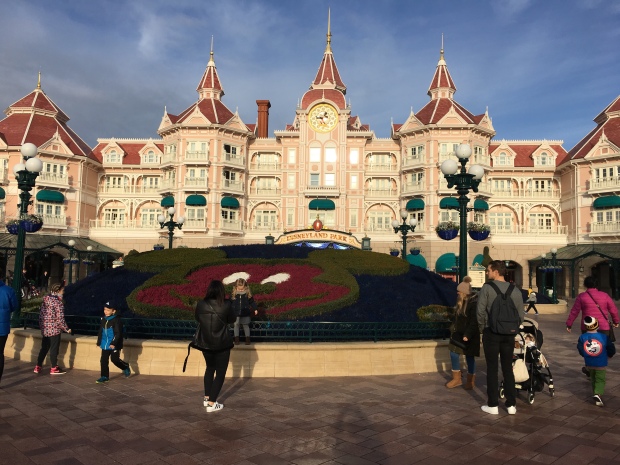 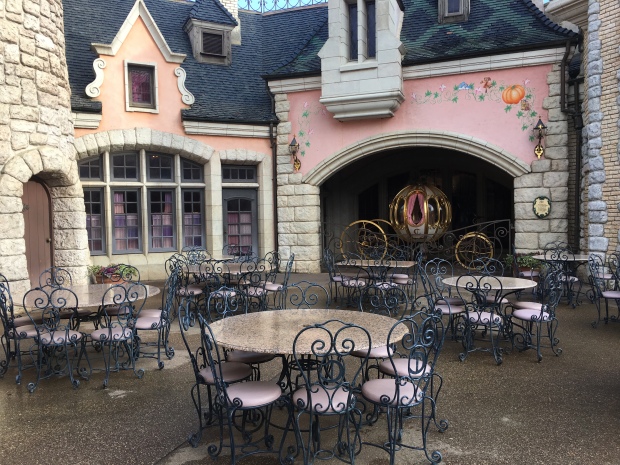 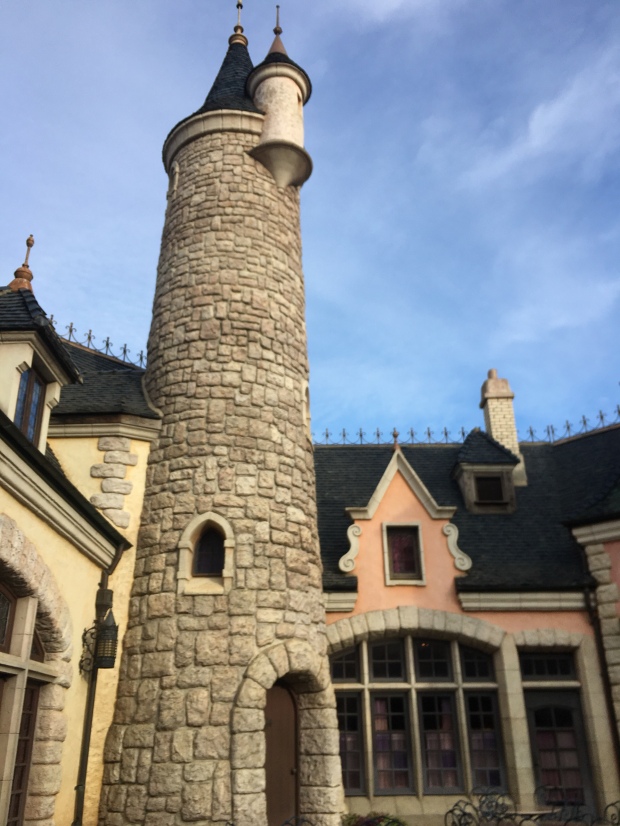 We saw Mr. Smee first, and there was literally no queue for him, so he was fun to meet.

We were just walking, then we spotted Baloo, and there was a short queue, so we went up for a cuddle, and oh my, he was so tall, I mean, look at the height difference!

We then headed towards the queue for Peter Pan and Wendy, who we spotted running past the day before, and they were so cute, so we had planned to meet them properly for photos. They were the sweetest, and this is probably my favorite picture from the trip, they were making us ‘pinky promise and stamp it’ that we would come and live in Neverland and read them bedtime stories. 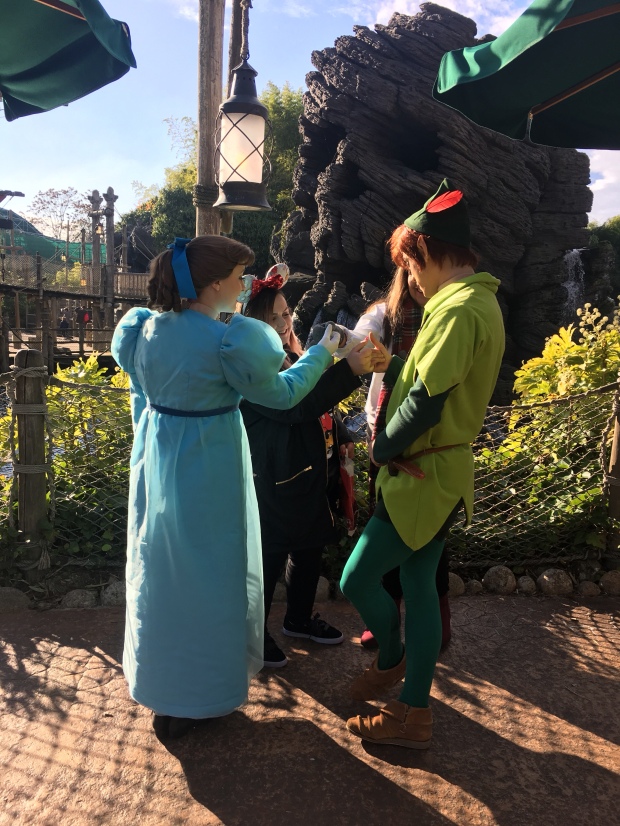 Again, we were then just walking looking for the Indiana Jones ride, when we spotted Jasmine and Aladdin walking by, and the cast member so kindly said to us that there’s no queue and pointed out to us where they’d be back in a few minutes if we wanted photos. They were so lovely, and Abu was super cute. I had to say it to Jasmine how beautiful her makeup was! And um, how beautiful is this Aladdin character please? My ideal type of man. 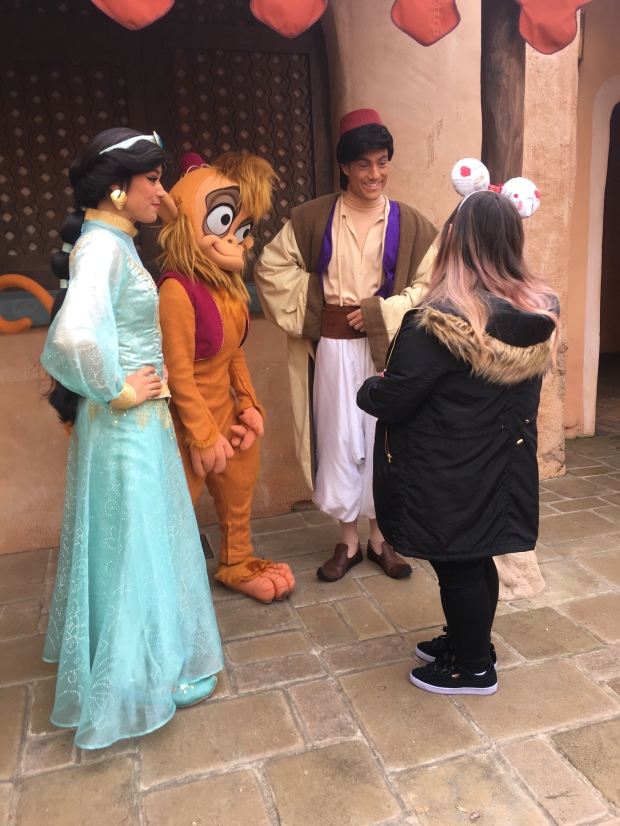 We then saw the Stars On Parade, for the 25th anniversary, and it was absolutely adorable! Like the Christmas, I was in awe how beautifully all the costumes and floats were done! And what was super cool about this parade was at the end, you could join the parade and walk behind it.

After the parade, we found ourselves back over at the Studios park to see the Christmas show at the Tower Of Terror, called Goofy’s Incredible Christmas. It was super cute, with some of the characters, along with Santa, joining in with Goofy singing Christmas songs, and a beautiful laser light show on the Tower Of Terror and some fireworks.

And as if we didn’t feel festive enough after these Christmas shows, we headed back over to the Disney park and saw the Mikey’s Magical Christmas Lights show, which was super cute! It was Mickey and Minnie, along with Santa, turning on the Christmas lights of the Christmas tree and along Main Street, and a Christmas song singalong! 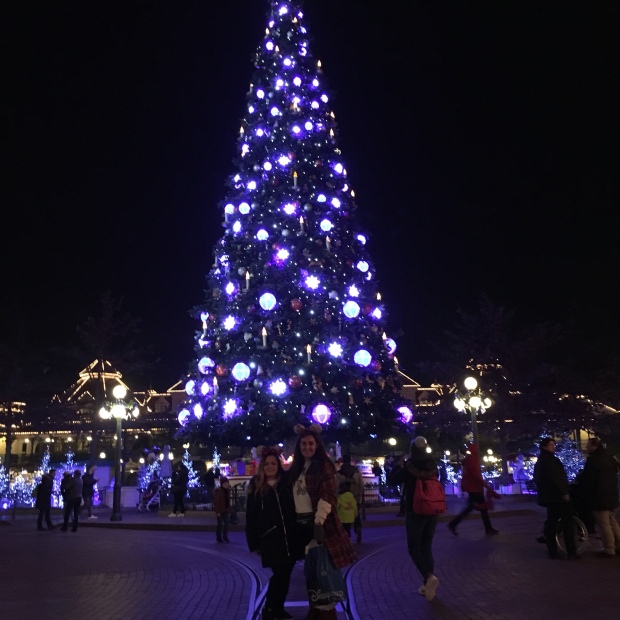 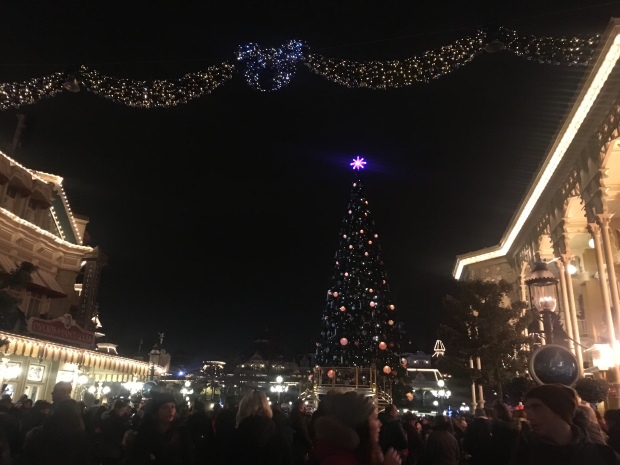 Then it was time to see Disney Illuminations for the last time of this trip, and as you can imagine, the most emotional show of the trip, knowing it was our last time seeing the show! 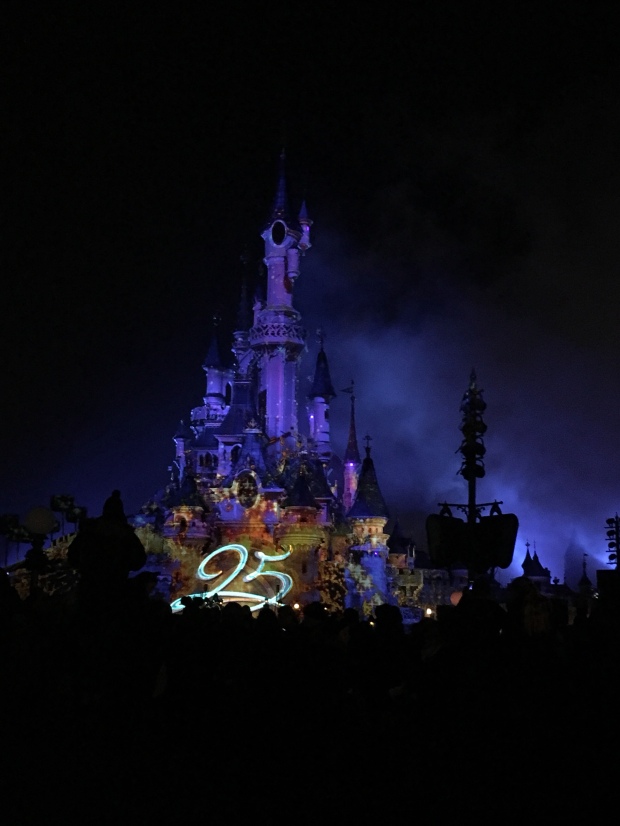 Today started off at Walt Disney Studios, and the first thing we spotted was Mary Poppins with two of her penguin friends, and with no queue at all. She was so lovely to meet and the penguins were so so cute, taking our ears and wearing them on their beaks. And another dream of mine came true, hugging a penguin. 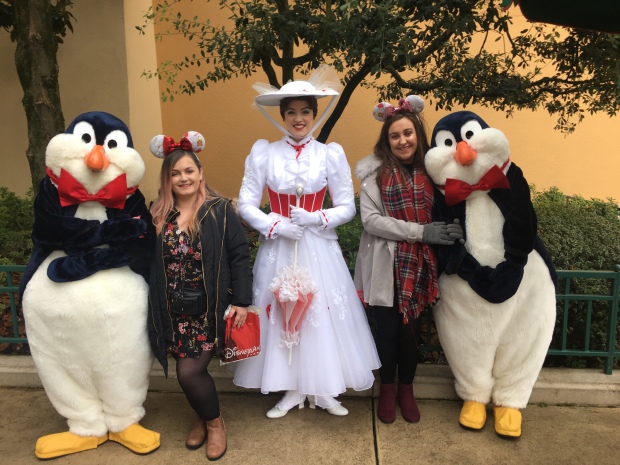 We then went around taking some photos, most importantly, with the statue of Walt Disney and Mickey!

We then mainly focused the day going on all the rides again that we had really enjoyed, so it was a really fun day. We also went around taking as much photos as possible, as this would be our last day of this trip in the parks. And believe me when I say, you just want to take photos of/with EVERYTHING, everywhere you look is just so photogenic!

We then repeated what we had done the night before… we headed to Planet Hollywood in Disney Village for dinner and drinks, but before Illuminations this time, as when we waited til after the show the night before, we had a long wait. Then we headed to the shops and then the cocktail bar, before heading back to the hotel. 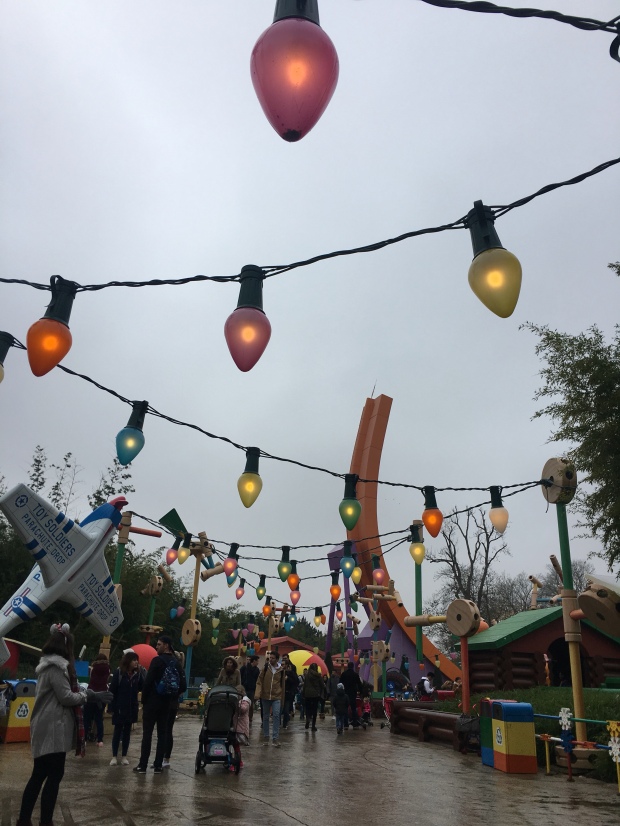 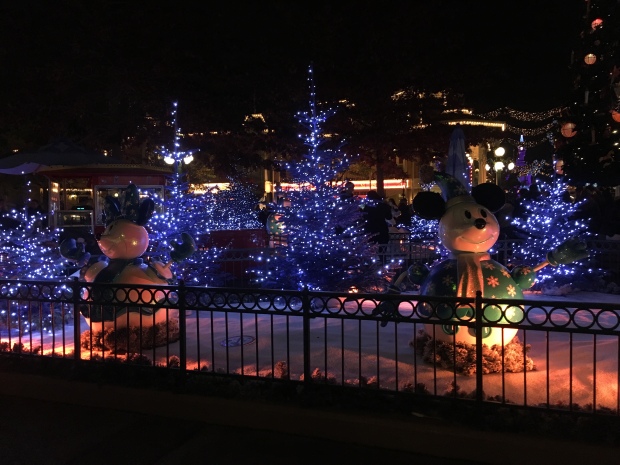 I didn’t include this day in the title or intro, as it was our last day in Paris, and we hadn’t quite got a full day, so we didn’t bother purchasing tickets for the parks, so we went to the Disneyland Hotel to see if we could go and see the inside, and to our surprise, you can! It’s absolutely beautiful! And also to our surprise, we spotted Goofy in his normal outfit, so it was nice end to the trip. 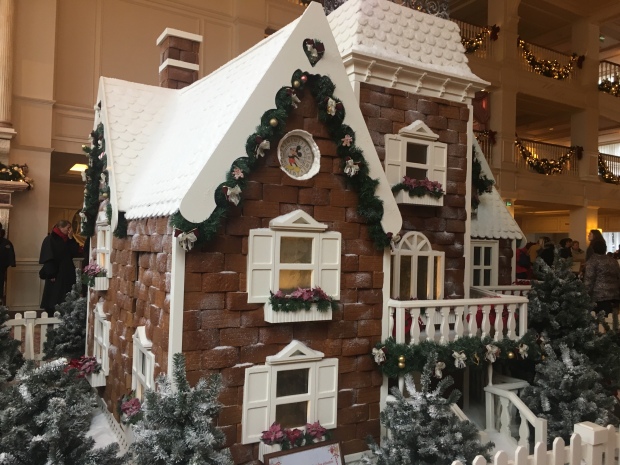 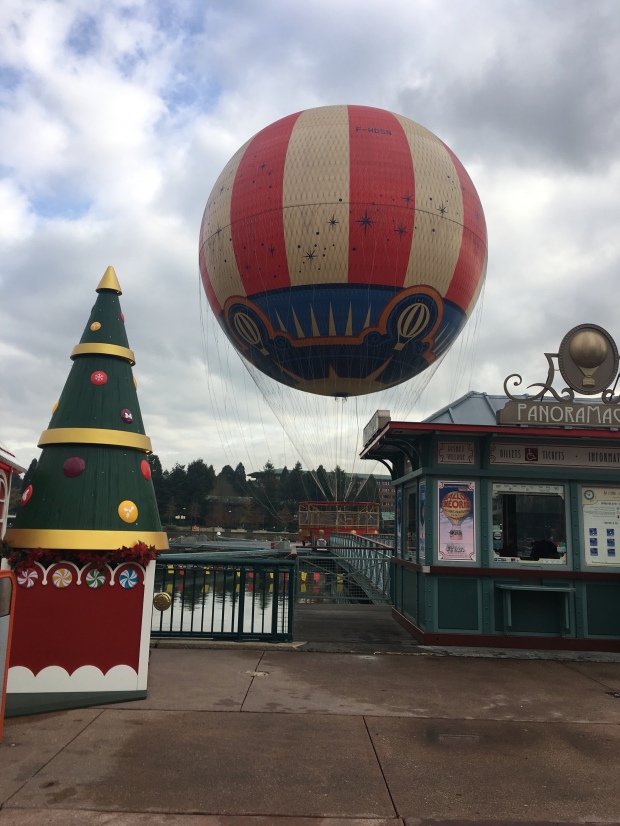 And that, my friends, was pretty much the end of the trip, we just had some food at the diner in Disney Village and did the rest of our shopping, and then headed back to the hotel for our transfer to the airport for our flight home.

Let me know if you’d like to see a haul of what I bought on this trip! I’ll be sure to do a proper haul on the next trip! I already can’t wait to book another Disneyland Paris holiday!

I hope you enjoyed reading this post as much as I enjoyed putting it together… what a magical few days! I don’t think a place has ever made me feel so happy, and just feel care free, like a child again! If you’re a Disney lover and like us, have left it this long to experience Disneyland, do it!

Thanks for reading loves, here’s to another year full of amazing memories!

9 thoughts on “4 days in… Disneyland Paris…”